Starting Where We Are

Sharon Irish (SI), one of FemTechNet’s co-facilitators for 2014-16, recently interviewed Ivette Bayo Urban (IBU) about the course she is teaching this term in Seattle, “Community Technology Literacy and You.”  Ivette is a doctoral candidate in Information Science at the University of Washington.  She obtained support for Starting Where We Are, a project funded by City of Seattle Technology Match on behalf of Casa Latina. Together with members of Casa Latina, university students from the University of Washington and library partners, she is working together across differences with shared goals of 1) increasing digital and information resources for adults as well as 2) early literacy and imaginative play for youth.  She also received support from the Center for Experiential Learning and Diversity to offer a for-credit course to students at UW and a community course to people involved with Casa Latina. Sharon was curious how this worked. UPDATE: In June 2015, Ivette shared this video about her work. 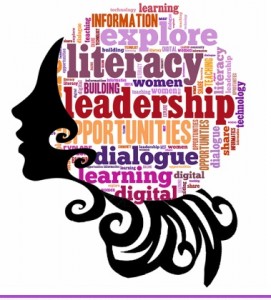 IBU: Last quarter I had seven students on the project, most of whom were master’s candidates in LIS, including one distance-learner in a predominantly Spanish-speaking rural area with limited access to the Internet and one master’s of information management. An anthropology major took an independent study and served as our project manager (but is actually so much more!) We worked to be non-hierarchical and come to agreement on our goals so that we could be ready for our activities in 2015. This term I am working with five students officially, but others are involved doing their capstone projects in connection with the class. Another four students are building a Little Free Library at Casa Latina.

SI: How often and where do you meet?

IBU: We meet on campus once a week from 3-4:20PM and then we carpool to our community partners, and work with them from 5PM to 7PM. The funding from the Center for Experiential Learning enables us to provide a van to transport people from Casa Latina to branches of King County Public Library and Seattle Public Library. The program started in January and goes through July of 2015. While attendance varies, we usually have six to seven women from the community.

SI: How are the sessions in community locations structured?

IBU: We have a theme each session; last week was email. The Advisory Group, made up of women from Casa Latina, helps guide decisions about programming. Members of the Group also rotate handling logistics for each meeting, and they get paid $15 an hour (for 2 hours) to set up and coordinate sessions, which are conducted in Spanish.

I was able to get additional funding from the Information and Society Center  to provide programming for children while their parents are involved with our digital literacy sessions. UW students either provide childcare, or work in small groups with the Latina women who want to expand their digital skills. The grant to support childcare allowed us to buy a puppet theatre and some iPad minis. We have had up to seven children, including three babies!

SI: How does FemTechNet mesh with your work?

IBU: FemTechNet is a source of inspiration for the collaboration between university and community. Despite learning about FemTechNet after the grant was approved, every aspect of the participatory framework and vision was etched with some of FemTechNet’s manifesto, which is why it is appropriate that this project be offered as FemTechNet node.

All of us have read the FemTechNet manifesto, either in English or in Spanish. We share the work in terms of grant administration, course readings, and community programming. We explore together socially-defined identities and are using Blogger for our reflections. We also have a Weebly site (built by an informatics student) for sharing readings, announcements and reminders across our groups. We are committed to the Toltec Four Agreements.

SI: Tell me more about the Toltec Four Agreements.

IBU: The Casa Latina women’s leadership group has used the Toltec 4 Agreements by Don Miguel Ruiz as ground rules and for leadership development.  Therefore we are also using them.  Our handout consists of the agreements on one side and the FemTechNet manifesto in Spanish on the other.

The Four Agreements are:

SI: Ivette, thank you so much for sharing your vision and practice! I invite people to explore the link to your website for further information.

IBU: You are welcome! Martin Nakata (2002) reminds us of the importance of developing scholarship in “contested spaces of cultural interface.” My activism happens in classrooms, attentive to the complex and uneven relations that exist as we travel and share social and cultural spaces with universities, organizations and individuals. Please check out Starting Where We Are!

Many Romance languages, like Portuguese and Spanish (and French to a slightly lesser degree) have a grammatically ingrained predilection for sexism. As you’ll remember from your high school “SPAN 1AB” or college “SPAN 101” course, whenever there is a group of people and any one of them is male, they are referred to with “los,” the Spanish language definite article, as in: Los chicos, María, Juan e Isabel visitan la playa todos los veranos.

This default mode for masculine markers also shows up in what we call “demonstratives” in the world of language:  Otros, por ejemplo Fernanda, Marcos, Luis y Estrella, prefieren ir a las montañas.

As you can see in the two examples above, female figures either (1) represent the majority of characters in the statement or (2) represent exactly half of the group, but the masculine article is still used.

This is an interesting and problematic space to explore for me as someone who is working as a translator for this feminist collective. On the one hand, I’ve been taught for years that respecting the conventions of formal language use is a vehicle of strong communication. This applies in arenas such as the use of the subjunctive, indirect object pronouns and precise vocabulary. On the other hand, as a 21st century learner, employee, woman and feminist by essence and association, I realize how exclusive these conventions can be when it comes to conversations about the sexes. The “o” in “los” excludes, ignores or overshadows the females it represents. What do we do?

Hi, my name is Katrina Spencer and I have used sexist language.

In this area of the FemTechCommons, periodical press releases can be found regarding the goings-on in our community. As a “grad hourly” at the University of Illinois Urbana-Champaign’s Graduate School of Information Science, one of my jobs is to translate these press releases from English to Spanish in order to include wider and even international audiences. The sexist language constraints I’ve described, however, are ones I encounter, consciously or subconsciously, every time I open my mouth to speak Spanish.

It is my belief that a good deal of the pedagogical resources shared in this space are intended for women and used by women. As a matter of fact, for every ten females I see using this space, I have seen only one male. But when I translate a document about FemTechNet users, my inclination is to type, “los estudiantes” and “los instructores.” Grammatically speaking, I’m “right” but socially I am diminishing the strong, ubiquitous and pulsing female energy that has created and developed FemTechNet.

Is there an easy solution?

Yes, okay, that’s fine, but how, now, do I pronounce it/ say it out loud/ read it aloud?

Also, what happens when I want to say “The participants in the Video Dialogues will include Judy Wacjman, Anne Balsamo, Julie Levin Russo, Faith Wilding and many others”?

Indulge me for a moment. The only participants listed are female. “Many others” does not identify sex. Should the sentence start off as “Lxs” or “L@s” in order to leave the possibility open of men participating in the future? Or should it be “Las” because up until this point, only women have shared the space?

And given that “lxs” and “l@s” cannot be pronounced, should every sentence sound like, Los miembros y las miembras publican sus opiniones en los foros?

Is it acceptable for language to be awkward and cumbersome in order to also be inclusive and sensitive? What does “fair” and “feminist” language representation look like? Do you type/write “s/he” when referencing a figurative, anonymous and sexless third person?