DOCC 2012: Dialogues on Feminism and Technology

In November 2012, Anne Balsamo sent this email message to a group of us who had earlier expressed interest in developing Distributed Open Collaborative Courses:

I am writing to you because you indicated your interest in teaching a nodal course in the proposed Distributed Online Collaborative Course (DOCC) called “Dialogues in Feminism and Technology.”

At this point, we have instructors from more than a dozen schools who have expressed interest in the effort.  We are hoping that you are still interested and able to participate.  This letter describes the process for building the course collaboratively with a group of diverse instructors, students, and institutions. We also provide an overview of our current understanding of the networked learning experiences we are hoping will structure the DOCC.

With a series of emails, then, and amazing energy on the part of our co-founders, Anne Balsamo and Alex Juhasz, the DOCC and FemTechNet were launched! 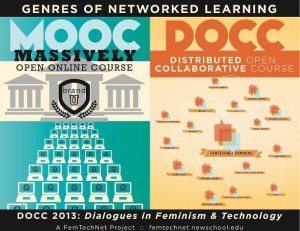