Feminism and Latina Representations in Media

On November 21st, 2013, at the University of Illinois, I presented my research on representations of Black, Latina, and Queer bodies within advertisements and content in Seventeen magazine. There are problematic cultural stereotypes being perpetuated in relation to these bodies, and more work needs to be done to represent these bodies in ways that don’t conform to a performance of “White Woman” Drag: in other words, a performance that prefers straightened hair; a streamlined body frame with controlled curves, ideally focused on the breasts; clothes and accessories that can be easily visually read as “girl,” “feminine,” and “middle class.” Perhaps most importantly for this performance’s aim of reinscribing dominant cultural values, it expresses and actively pursues heterosexual desire that works towards the reproduction of a nuclear family and the accompanying ideologies that will ensure the cycle repeats itself ad infinitum. “White Woman” Drag both makes visible and invisible that which it signifies: the performance calls upon a culturally agreed concept of “White Woman” while simultaneously erasing any features that would identify the concepts of “white” and “woman” with an actual body or group of bodies that really and truly exists in the world. (I’m currently in the process of theorizing “White Woman” Drag so  forgive me if this articulation of the concept is lacking or unsatisfying at the moment.) The perpetual reification of “White Woman” Drag in images, media, and cultural consciousness devalues and undermines the ethnic identities that it compounds and breaks down within its signifiers. 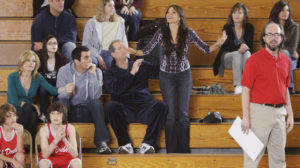 Photo by Michael Desmond/ABC. Just after the moment depicted in this photograph,
Gloria’s son asks her to not root for him at the game because she’s too Latina.

Despite people coming up after my talk and congratulating me for a job well done, I felt I was preaching to a very invested choir. I’m a doctoral student at a Research I university, but I wonder if I am doing all that I can from this privileged position to further my feminist fight for equality regardless of race, class, gender, or ability, especially in relation to Latina bodies. This is where technology helps amplify the movement: as a feminist today, there are many avenues for activism and criticism that folks can join. Ms. Magazine has been going strong since 1971, Jean Kilbourne’s “Killing Us Softly: Advertising’s Image of Women” is in its fourth installation, the Feminist Majority Foundation is 25 years old, Bitch Magazine is 17, the Media Education Foundation’s series is 14, and both the Geena Davis Institute on Gender in Media and Feministing are coming up on their tenth anniversaries.

And yet I also live in a world where “Modern Family”’s Gloria is told by her son that she can’t help her fiery outbursts—she’s Latin, it’s in her blood. While Gloria’s outfits struggle to contain her buxom figure, I shake my head as I add her to my running mental list of Latina women failed by media representation, almost tauntingly as if waiting to see when anyone will notice the stereotypes they keep perpetuating. Eva Mendes, Jennifer Lopez, Salma Hayek, and Cameron Diaz are almost always represented as Latina bombshells. If Latinas aren’t represented as sex kittens, their ethnicity is often hidden or erased on screen. Although Rosario Dawson has been luckier, Gina Torres has yet to play a Latina on screen despite being of multiracial Cuban descent. This is nothing new as Dolores Del Rio, Lupe Velez, Carmen Miranda, Rita Hayworth, and Raquel Welch are all examples of Latina bombshell typecasting, with Hayworth and Welch at the extreme end of the typecasting spectrum by virtue of having been packaged and represented as non-Latinas for public consumption. (As of 2002, Welch has publicly claimed her Latina identity because of her performance as Aunt Dora in PBS’s “American Family”.)

Will Latina women ever find themselves not being represented as fiery-tempered and cartoonishly-curved, with voluminous hair, as they mew and preen for viewers? While this question isn’t new and there are certainly academic conversations devoted to the topic, I wonder if education and publication is enough to win the long-term battle to transform and open up representations of Latina bodies to include a wide variety of gender expressions and performances in the media?

What other models can be followed to work towards transformation? Is the future online? In self-produced and crowd-funded video analyses, like Feminist Frequency? In pop cultural packaging for quick, immediate uptake, like Feminist Ryan Gosling? In community-specific and community-sourced exchanges, like Rookie? Or is the future beyond what we can come up with today?

NOTE: Danielle Henderson has said that she started Feminist Ryan Gosling as joke flashcards to help in studying the work of the cultural theorists she was learning at the time of her master’s degree. However, I think there’s a lot for academics and academia to learn from the way that the project culturally resonated, almost overnight.

Xuxa Rodriguez is a first year PhD student in Art History at the University of Illinois Urbana-Champaign. Her doctoral work focuses on the work of Afro-Cubana and Cubana artists Coco Fusco, María Magdalena Campos-Pons, and Ana Mendieta. She also works on gender performance and representations of women of color in media and fashion. More info on her work and interests can be found at https://xuxarodriguez.com.

DOCC 2013 Courses Wrapping Up The Eye of the Wikistorm