Subway, bus, car, train, plane – I am travelling 600 miles each week round trip between Philadelphia and Boston to teach women’s and gender studies classes. I have done this for a decade now, for some 30 weeks a year. By now I have travelled over 150,000 miles just getting to work and back; I have never missed a class due to weather or because of the commute. This is referred to by some as a “two-body problem”; my partner has a tenure-track job in Philadelphia and my part-time position is at MIT (The Massachusetts Institute of Technology), 300 miles away. I spend a lot of time alone.

For that reason, it is at once ironic and fitting that I am writing about collaboration for the FemTechNet Roadshow blog series. To collaborate is, after all, “to work with another person or group in order to achieve or do something.”[i] For me, finding FemTechNet meant finding a virtual community of feminist scholars, a collaborative network of people dedicated to fostering connection and unafraid of trying out new technologies to make it happen. For me this was like a life preserver thrown to a drowning person, steeped as I was in feminist thought but academically adrift in a sea of isolation. Technology enables collaboration across time and space, to be sure, but as we wrote in the FemTechNet Manifesto, “collaboration is a feminist technology” – so the two are mutually constitutive. Collaboration is an essential part of the FemTechNet DOCC (Distributed Open Collaborative Course), and it is happening at every level – between teachers as we establish new pedagogical connections across institutions, between teachers and students in Open Office Hours, between students in the completion of group projects, and between scholars through feminist video dialogues, writing and conferencing.

Some examples of innovative feminist technological collaborations we have explored, both in and out of the classroom:

Creative and often experimental, the open and collaborative nature of FemTechNet pedagogy actively breaks down conventional distinctions between teacher and student, performer and audience, inviting a different kind of scholarly conversation and discovery of new “truths” in situated knowledge and shared experiences. In Teaching to Transgress, bell hooks writes that “the classroom, with all its limitations, remains a location of possibility.”[ii] The feminist DOCC reinvents the classroom as we have traditionally known it, displacing it. Many of our assignments and projects are collaborative, experimental, interdisciplinary. By reimagining the writing process itself, the DOCC has the potential to destabilize power dynamics that can limit participation in conventional academic settings. 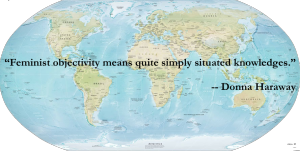 Let’s take a look at an example of collaborative feminist pedagogy in action, using the FemTechNet Situated Knowledges Map as a case study of “hacking the global map,” an innovative way to connect and engage students in actively thinking through the politics of location. Feminist thought has a long history of posing a challenge to the uncritical presumption of objectivity informing much traditional scholarship, particularly in the sciences and social sciences. The notion of feminist epistemology as particularly situated knowledge is the basis for rethinking methodologies in academic research, if not the very foundation of critical thinking in its attempt to shake basic assumptions about meaning and how we know what we know. As Haraway notes, “feminist objectivity means quite simply situated knowledges.”[iii]

The unique pedagogical application of the FemTechNet Situated Knowledges Map engages in an experiment in critical cartography by networking students asynchronously from multiple locations, inviting them to strategically locate themselves on a shared Google map. Students are invited to drop virtual pins on a shared map, authoring narratives in which they contribute a description including a relationship to place in connection with their own identity or lived experience. These may be text-based, or multi-media, integrating embedded images and/or video to provide a unique portrait of the chosen site, in many cases including explicit consideration of technology and feminism. They are able to read and respond to other students’ pins, facilitating inter-institutional dialogue, many times between pin authors physically located hundreds or thousands of miles apart who will never meet each other in person. 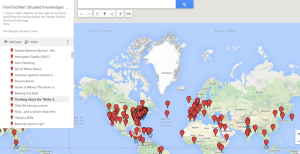 Students participating in the first semester of the map project were in DOCC nodes at Temple University, MIT, Yale, Ohio State University, Swarthmore College, University of Michigan, Colby-Sawyer College, The College of New Jersey, Flagler College, and West Virginia University. The pin narratives they wrote on the map strikingly represented a wealth of diversity and shared experience, and the resulting artifact became a treasure trove of teachable moments in some very intriguing and unpredictable ways.

For example, many students chose to write about travel or study abroad experiences, with varying degrees of awareness or interrogation of their own position relative to the non-Western and/or developing nations they visited. The map became a place of struggle to reconcile impulses to claim an essentialist global feminism with a robust critique of what T.L. Cowan termed the “White Savior Industrial Complex”[iv] in a pin comment aimed at complicating some unproblematized missionary narratives. The map became a place to work out theoretical problems and positions relative to feminist thought in a very direct and personal way for the students reading and writing into it.

Jeremy Crampton and John Krygier observe in their essay on critical cartography that “maps are active; they actively construct knowledge, they exercise power, and they can be a powerful means of promoting social change.”[v] Embedding a global map with feminist reflections about particular pin locations has the potential to challenge assumptions about space, place, and geopolitical boarders, or at the very least foster some conversations about what those look like from the vantage points of different identity locations. Feminist mapping, Keifer-Boyd and Smith-Shank argue, “demystifies and destabilizes the old cartographic binaries of inside and outside. It looks at ways cultural borders are crossed and hierarchies of place are normalized.”[vi]

We saw this playing out in another example through the emergent theme of street harassment and catcalling, which echoed through many pin points in different cultural locations, prompting dialogue around intersections of ethnicity, race, class, sexuality and gender presentation. One identified catcalling as the impetus for a feminist consciousness, describing the feeling of “that sudden fear that a stranger is shouting at you, the realization that this means you may be attractive, the crushing oppression once the attraction dissolves back into fear.”[vii] Others took a more direct tone of resistance in posts titled “Stop Telling Women to Smile” and “You Should Smile”: “Those words that seem so harmless to them make me feel exploited. Why do I have to smile?”[viii]

The map also invited cross-cultural analysis of catcalling, with students debating about the extent to which street harassment is culturally specific, or specifically reflective of Western beauty ideals and objectification of women. Tracing these pins thematically, the map documents a unique learning experience through the shared conversation about what it means to experience and/or report on harassment through specific embodied positions and boundary crossings across cultural differences. One Swarthmore student expressly addressed the cross-cultural conversation on street harassment she observed taking place on the map, integrating a reference to Cowan’s white savior industrial complex:

I’ve spent time working or studying in Chile, India, and the Dominican Republic, and found myself (a white cisgender woman) getting a lot of unwanted attention on the street in each place. I want to push back against some of the other pins that suggest that this attention is due to men being attracted to a standard of beauty that is white. Street harassment is about power and control, not attraction. Also, local women probably experience just as much street harassment (and outright violence). But maybe catcalling of women who look white and foreign in these places is a way that men say, “You shouldn’t be here,” and resist the white foreign presence that is often thinly veiled colonialism. Maybe it’s a way of expressing anger towards global inequality or the white savior industrial complex.[ix]

The map also offered situated analyses of gender and sexuality as they were read cross-culturally. In one example, “Bunny Means Cute, Not Gay!” a pin narrative describes the homophobic confusion that occurred after a Tweet depicted a South Korean eSports gaming team wearing bunny ears, and American fans questioned whether the team was gay as a result. The notion that male gamers wearing fuzzy bunny ears would be read as cute in Korean culture, rather than effeminate or gay, required special explanation by the photographer tweeting the photo.[x]

Several narratives addressed non-binary or transgender identities and some of the cultural confusion surrounding the reading of the body in physical space. Some of these featured interesting reversals of cultural assumptions or norms, as in “A Twist on Restrooms,” in which a trans woman trying to avoid a long restroom queue was ironically kicked out of the men’s bathroom.[xi] Cultural specificity of gender and sexuality was central to another insightful transgender pin narrative, “With the Aid of Strict Gender Roles.” Set in Singapore, the narrator explains,

I discovered the first time I went out to the mall alone to browse around, that the strict gender roles actually helped me to be “out” in Singapore. Because the roles were so strict and I wore “men’s” clothes and had short hair, everyone at the mall just assumed I must be male because otherwise why would I look that way? And it was great! It offered a welcome reprieve from all the misgendering at work and made me feel a lot more comfortable in my ability to be read as male. I actually got read way more often as male in Singapore than at home in Boston.[xii]

This ability to think and reflect with others in an active, living digital artifact such as the Situated Knowledges Map extends the classroom beyond four walls to powerfully engage students in feminist thinking in new ways. Reading peer perspectives that challenge their own thinking or reveal their experiential knowledge as culturally specific, students expand their understanding of how others encounter gender, race, and class dynamics in the world. This learning project is just one example of the many ways to think about collaboration in the DOCC.